welcome to a new day in nationals Fandom 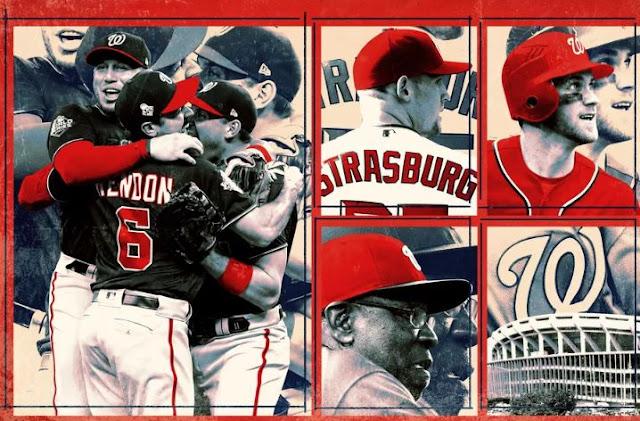 I didn’t much care when the Nationals first arrived in Washington, D.C. At the time I was 11 years old, and couldn’t comprehend even the most fundamental aspects of how baseball worked. Why was I, a right-hander, supposed to wear my glove on my left hand? What did it mean to tag up? I didn’t know then that learning answers to these questions meant signing a lifetime contract to be a Nationals fan. And I certainly didn’t anticipate the way that fandom would impact the years that followed, and the relationships that have defined them.

For those who don’t remember, the early Nats sucked. Or rather, the inaugural Nats were unremarkable, but the early Nats after them sucked. A roster led by Cristian Guzmán, Liván Hernández, and 20-year-old rookie Ryan Zimmerman raced to a 50-31 start across the first half of the 2005 campaign, but went 31-50 from there to finish dead last in the NL East. Then came the lean times: Alfonso Soriano’s one-year stint with the Nats in 2006; a starting outfield of Ryan Church, Austin Kearns, and Nook Logan in 2007; the ill-fated Lastings Milledge experiment of 2008; the myriad managerial mistakes made by Manny Acta (and then Jim Riggleman) in 2009. Between 2005 and ’09, Washington went a combined 343-466. At one point, the team forgot how to spell its own name.

This wasn’t all that important to me, though, because the Nationals came to make me happy. I warmed to the idea of a baseball team being nearby, and every once in a while I got to go see them. Whatever Washington Senators fans remained in D.C. could enjoy a day at the ballpark again. Children of the ’80s born into Orioles fandom were able to convert. A winning ballclub would have been great, but after the city had spent 34 years without a team, any baseball at all was welcome. The Nationals ranked 11th in attendance in 2005. During that first season, they packed their makeshift house full.

The initial Nats games were played in Robert F. Kennedy Stadium, a strange and isolated relic. The city’s football team grew famous there, and then moved east, out of the district, to FedExField in Landover, Maryland, where it would piss away the nearly indescribable amount of goodwill it had built up during its heyday. RFK today is a shell—old, rusting, and more or less abandoned. In September 2019, the city announced that it would be demolished. There was nothing happening there that made the maintenance fees worthwhile.

For the first three years of the Nationals’ tenure in Washington, though, the team played in RFK, its organs modified for baseball. And despite it all—the bad record, the bad stadium, my personal lack of context—I was in awe of the simple things that winning and aging can minimize. A ball could plop into your lap and you could keep it forever. How wonderful!


I knew that Stephen Strasburg’s first MLB start on June 8, 2010, was a special occasion. After all, I was sitting in my basement on a Tuesday—a school night!—eating Domino’s pizza with my friends. All day, ESPN had kept a countdown clock on screen leading up to the first pitch. That game still has a name: Strasmas.

Strasburg’s debut start was important because in 2010 “Stephen Strasburg” was less a 21-year-old with a blessed right arm than the wishes and wants of a fan base made manifest in human form. He wasn’t just the no. 1 selection in the 2009 draft, but also the highest-paid draft pick in baseball history, and supposedly the most complete prospect ever to enter the major leagues. (At least until 2011, but we’ll get to that.) His mythic fastball was supposed to tear through dimensions. Remember the buzz that surrounded Daisuke Matsuzaka’s gyroball? Strasburg had whatever level of hype is above that.

D.C. during the early years of the Obama presidency was an odd place. Optimism was in the air, and the internet was just beginning to show how quickly it could amplify emotions. The year before Strasburg made his debut, I saw fans wearing his Triple-A Syracuse Chiefs jersey. Suddenly, his face and name were plastered everywhere. “The attention rivals anything I’ve ever seen in sports,” then–team president Stan Kasten said. “For us, this is as big as it gets. We’ve got a World Series–sized media contingent here for a Tuesday game against the Pirates.”

The hype was justified. Strasburg throttled the Pirates with singeing fastballs and breaking balls that arched into the sky before diving violently through the strike zone. He struck out one batter in the first, then the side in the second. In the sixth, the radar gun clocked one of his pitches at 101 miles per hour. The broadcast mistook his changeup for a fastball. He left the game after seven innings, having struck out a franchise-record 14.


Tickets to Strasburg’s debut were nearly impossible to come by. This was the team’s third season at Nationals Park, a new stadium built next to the Anacostia River in the city’s Navy Yard, but sellouts were sparse. Only half of the venue’s 40,000-plus seats were filled in the weeks before Strasmas. The average resale ticket on that day went for more than $100. A friend of mine managed to get one. Outside, he bought a bootleg shirt that looked like it came from a tacky magic show. Maybe that’s what Strasmas was.

It’s funny, that shirt. Its Powerpoint-graphic-esque words were the slightest bit off. Under Strasburg’s visage, it proclaimed that the future was now. The shirt turned out to be right. It was just nine years ahead of reality.


The 2012 Nationals had the wind at their backs. They won 98 games, the most in the majors. Outfielder Jayson Werth, signed before the 2011 season to a massive seven-year deal, had struggled with performance and injury, but that hardly mattered. Bryce Harper—the next Chosen One, he of that Sports Illustrated cover and the 600-foot home runs and the undeniable swagger—had been called up, and, boy, was he magnificent. He swatted 22 homers and stole 18 bases while putting up a .270/.340/.477 slash line en route to being named NL Rookie of the Year. By WAR, his 2012 season is still the second best of his career.