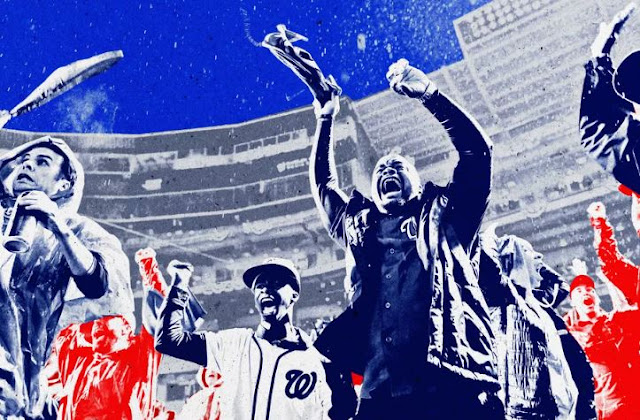 It started innocently enough: Every time the Nationals clinched a playoff berth, Russell de Leon would buy cheap champagne and toast the team with a fellow bartender.

The problem, though, was what came next. Year after year—2012, 2014, 2016, 2017—the Nationals won their division; year after year, they flamed out of the NLDS in dramatic fashion. “I always got really excited, and then they lost,” de Leon says. “And then I’d root for them again, and they’d lose again.” By 2017, when the Nationals once again fell in the first round of the playoffs, it felt important to drink the champagne early, because the Nats weren’t likely to offer anything else to celebrate. Rooting for the Nationals in the postseason, he says, was “just tedious.”

On Wednesday night, de Leon held down the bar at the Pug in Northeast Washington, D.C., the kind of dive that brags about its bad Yelp reviews. (“Décor is a mishmash of anything goes and garage sale items, including the ripped booth cushions we sat on. It just felt dirty all over.”) To face Game 7 of the Nationals’ first-ever World Series, a grab bag of Washingtonians arrived:

Long-time neighborhood residents who grew up rooting for the Orioles, politicos still wearing the day’s suit and tie, recent transplants who’ve helped make D.C. the most rapidly gentrifying city in the country, students from nearby Gallaudet University signing their anxiety and delight (de Leon, like a lot of H Street denizens, can do the basics). As Nats starter Max Scherzer labored through five innings against the Astros, each of the hits and walks he issued fell on the Pug’s crowd concussively—ducking, wincing, covering their heads, letting out quiet hisses. When Yuli Gurriel homered in the bottom of the second inning, the standing-room-only bar fell silent.


De Leon, 40, grew up in the Virginia suburbs and moved to D.C. proper in 2008. He started bartending at the Pug in 2011; the bar’s owner, Tony Tomelden, is a D.C. native and has covered the walls in assorted District bric-a-brac: a picture of the Washington Senators, torn-out sports pages from The Washington Post, bobbleheads of G-Wiz, Davey Johnson, and Tanner Roark. “My favorite athletes as an adult have been Sean Taylor, RG3, John Wall, and Bryce Harper,” de Leon says. “That’s really all you need to know.”

This was a Nationals team with a tendency to make fans grind their teeth. Entering Wednesday, the team had trailed in all four of the postseason elimination games that it faced (the wild-card against the Brewers, twice in the NLDS against the Dodgers, and Game 6 of the World Series). The Nats did the same in Game 7, carrying a 2-0 deficit into the seventh inning before finally roaring back.

Anthony Rendon hit a one-out home run in the seventh, and then Juan Soto walked. The cheers for Howie Kendrick, already a postseason hero after hitting a 10th-inning grand slam to win Game 5 of the NLDS, began even before he smashed the go-ahead run off the foul pole; that ball, inked with the pole’s yellow paint, is already on its way to Cooperstown. At the Pug, beer flew.