the nationals spent big and won the world series 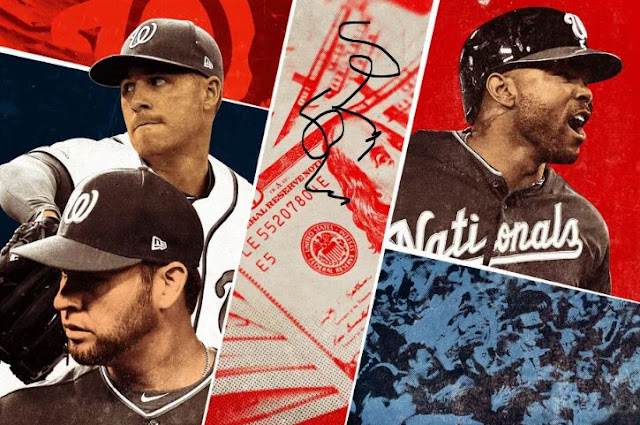 Even having had a night to process the result, it still doesn’t quite feel real: The Nationals won the World Series. When improbable comeback after improbable comeback is the defining method of the championship team, it can be difficult to interpret the outcome from a forward-looking perspective. Everyone who doesn’t win the World Series wants to learn lessons from those who did, but go down by two runs in every elimination game doesn’t really seem like repeatable advice.

Yet in the case of the Nationals and their title-winning roster, one lesson in particular stands out in the way said roster was constructed. Incidentally, it’s the same lesson offered by the 2018 Red Sox, Washington’s championship predecessor—but one that few teams followed last winter in the wake of Boston’s win. That’s something of an anomaly in modern sports, when most champions seem to supply takeaways for the rest of the sport to adopt.

As I wrote earlier this season, after Dave Dombrowski was fired as Boston’s president of baseball operations mere months after winning the World Series, “Other World Series winners of recent vintage have passed on lessons to the rest of the sport: the Royals, the elevated postseason value of a shutdown bullpen; the Cubs and Astros, the viability of a tanking and rebuilding approach. But few teams, if any, have learned the lesson of Boston’s 2018 title: spend and spend big.”

Boston triumphed last year with the majors’ highest payroll, after signing the likes of David Price and J.D. Martinez in free agency and making splashy trades for Chris Sale and Craig Kimbrel. The Nationals, on the surface, might not reflect a similarly expensive sheen, as the seeds of their decade of competitiveness came not from the open market, but from the draft: From 2009 through 2011, they picked Stephen Strasburg (first overall), Bryce Harper (first), and Anthony Rendon (sixth) after lots of losing.

Yet as that young core grew, and as the Lerner family that owns the club grew desperate for a title, the Nationals supplemented the young players with expensive ones. By 2018, they joined the Red Sox as the only two teams to pass the luxury tax line. And the Nationals were also one of the sport’s biggest spenders in 2019 as they won the title: Only the Red Sox, Cubs, and Yankees summed a higher Opening Day payroll this season.

The Nationals payroll could have climbed even higher had the team made a real effort to retain Harper last winter, when the former MVP reached free agency. Instead, the front office presented Harper with an offer ostensibly for $300 million, but with so much of the money deferred that the deal would have been worth in the neighborhood of $100 million less in present-day value.

That decision fit the trend of so many teams that have decided to slow-play the winter market, and downplay free agency entirely. But unlike many of its competitors, Washington didn’t stop with letting Harper leave; the club reinvested a sizable portion of that money in other free agents like Patrick Corbin, the best available pitcher, who had completed a breakout season in his walk year in Arizona. Corbin signed for six years and $140 million as the Nationals outbid competitors like the Yankees and Phillies.

Overall, only the Phillies and Padres, with Harper and Manny Machado, respectively, spent more on free agents last winter. And no team signed more MLB players than the Nationals, who in addition to Corbin’s nine-figure deal handed out contracts to a handful of other veterans. Those veterans, along with others who arrived in D.C. via trade, would enjoy various degrees of success with their new team.

Some of those degrees, admittedly, tilted toward the disastrous. On the mound, Trevor Rosenthal, Kyle Barraclough, Tony Sipp, and Jeremy Hellickson combined for a 7.14 ERA in 92 innings; the first three were on different teams by the summer, while Hellickson didn’t pitch after landing on the IL in May. At the plate, neither Matt Adams nor Brian Dozier hit at a league-average rate, and both were bench fodder by October.