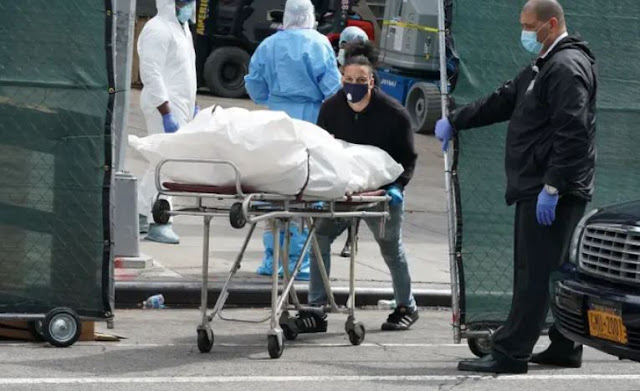 Many responses to Young's tweet accused the media of a conspiracy in ignoring the "true" death toll count.

But the table Young links to clearly states that data only covers the period from Feb. 1 to April 25.

Moreover, the National Vital Statistics System website makes clear that it has a significant lag in counting deaths because it relies on tabulating official death certificates it receives.

"It is important to note that it can take several weeks for death records to be submitted to National Center for Health Statistics (NCHS), processed, coded, and tabulated," reads a prominent disclaimer above the data. "Therefore, the data shown on this page may be incomplete, and will likely not include all deaths that occurred during a given time period, especially for the more recent time periods."

"Data during this period are incomplete because of the lag in time between when the death occurred and when the death certificate is completed, submitted to NCHS and processed for reporting purposes," reads another footnote.

In comparison, the CDC’s actual most up-to-date count of COVID-19 deaths is on a separate site and shows more than 64,000 people have died in the US.

As the CDC states, that tally is updated daily based on data received from state health bodies: "Case notifications were received by CDC from U.S. public health jurisdictions and the National Notifiable Diseases Surveillance System (NNDSS)."

Neither that CDC figure, nor the National Vital Statistics System page, have been revised down.

Since the onset of the pandemic, coronavirus "truthers" have been pushing false narratives that claim the virus is concocted, largely overblown, or that health organizations are lying about how many people are really sick. Last month, a former Fox News commentator shared a video aiming to show that hospitals aren't as overwhelmed with COVID-19 patients as the media has portrayed.

In another tweet that started to spread on Saturday, Martin Cowen, a libertarian running to represent Georgia in the House of Representatives, also linked to the lagging National Vital Statistics System counter and questioned why it was far lower than another tracker.