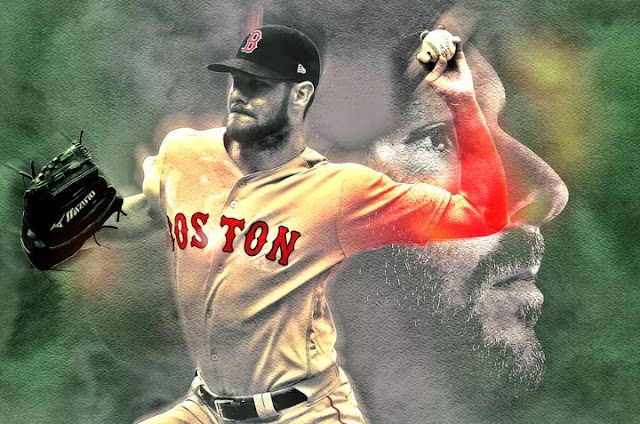 We have our first big baseball news since the COVID-19 pandemic forced MLB to postpone the 2020 season—and that news is bad. The Boston Red Sox announced Thursday afternoon that left-handed pitcher Chris Sale has a torn ulnar collateral ligament in his throwing elbow and will undergo Tommy John surgery.

This news is somewhat surprising, as it was only Wednesday that Sale started a throwing program while recovering from a flexor tendon strain that had shut him down earlier in spring training. On the other hand, the Red Sox ace hasn’t been right since mid-2018, when in the midst of the best season of his career, he landed on the IL with a shoulder injury.

Sale returned to gut through Boston’s championship run, in which he recorded the last out from the bullpen in Game 5 of the World Series. He signed a five-year, $145 million contract extension that offseason, but his struggles continued into the 2019 season. Sale recorded a 6.30 ERA through April and paired that with a shocking drop in fastball velocity. He managed to pitch through elbow discomfort until mid-August, but then the Red Sox decided to shut their ace down for the year in the hope that he could recover in time for Opening Day 2020.


Thanks to the ongoing international public health crisis, Opening Day 2020 is on the shelf indefinitely. But even if organized baseball happens this year, Sale won’t be on the mound.

Sale’s injury is routine enough that we know more or less how much time he’ll miss, but given the uncertainty around the season at large, we don’t know how many games he’ll miss. The timetable for recovery from Tommy John surgery is usually between 12 and 18 months, which means Sale would return for Opening Day 2021 at the absolute earliest. It’s all but impossible for MLB to play a full 162-game schedule this season, so even though Sale can’t pitch, the Red Sox won’t actually miss their no. 1 starter for at least another month, maybe more. But because Sale is getting surgery just before the season was supposed to start, an 18-month recovery would knock him out of action for two full years.


That’s in addition to the lost year Sale and the Red Sox already suffered in 2019. After watching Sale struggle the way he did as he bounced from injury to injury, though, it’s almost a relief to know that something, specifically, is wrong and can be fixed, even if he’ll be out of action for a long time as a result.

It’s also worth remembering that it’s something of a biomechanical miracle that Sale went as far into his career as he did without suffering a major injury. Conventional wisdom is that durable starting pitchers usually fall into one of two camps: big, beefy dudes like Gerrit Cole, and lithe, springy, athletic guys like Zack Greinke or Jacob deGrom. Either way, they tend to move fluidly and generate power without too much visible effort. At 6-foot-6, Sale has ideal length for a starting pitcher, but his 180-pound frame is so gaunt it’s a little surprising that he has any muscles or tendons to strain. Not to mention his delivery is about as ergonomic as falling down a flight of stairs.

Sale made his big league debut in 2010 after just one month in the minor leagues. The White Sox kept him in the bullpen for his first year and a half in the majors not only because he was particularly effective there, but because of concerns about his body and mechanics. There was seemingly no way he could hold up for 30 starts a year. And yet he did; from 2013 through 2018, Sale averaged 30 starts and 199 innings a year. Only four major league pitchers threw more innings over that time frame. That’s impressive durability by anyone’s standards, let alone for someone who looks like he reflexively starts dumping out buckets of water every time he hears a bassoon.

That’s the guy the Red Sox had for Sale’s first two seasons in Boston, and that’s the player they thought they were committing to long-term when they offered him that contract extension. But one reason it made sense for Sale to sign that contract when he did is the knowledge that pitchers’ arms are fragile by nature, and that some form of catastrophic injury could be around the corner at any moment.

If and when the 2020 season gets underway, the Red Sox will have to put together a pitching staff without Sale. That starts with 26-year-old Eduardo Rodríguez, who had a breakout year in 2019, with a 126 ERA+ in 203 1/3 innings. After that, though, things start to get sketchy. Nathan Eovaldi, like Sale, is a 2018 postseason hero who has had trouble staying healthy.

One free-agent signing, Martín Pérez, has a career ERA of 4.72, while another, Collin McHugh, is coming off an elbow injury of his own. And though McHugh’s been nearly unhittable at times over the past few seasons, he’s done most of his best work out of the bullpen. It only goes downhill from there. It’s extremely likely that the Red Sox will need rotation innings this year from the likes of Matt Hall, who wasn’t good enough to stick with the Tigers, and Mike Shawaryn, who allowed 22 earned runs in 20 1/3 innings out of the bullpen as a rookie. (Shawaryn is the second-best ballplayer alive among South Jersey natives named Mike, so he’s got that going for him.) Not to exhume the dead horse so that it can be beaten some more, but: Boston could sure use a David Price right about now.

If there’s a silver lining for the Red Sox, it’s in the timing of this announcement. Human beings can process only so much bad news at a time, and between the discontent over the Mookie Betts trade and the end of the Tom Brady era—to say nothing of the nation being on lockdown as a virus spreads across it—this is just another drop in the bucket.