apology tour is off to a comically disastrous Start, The Astros 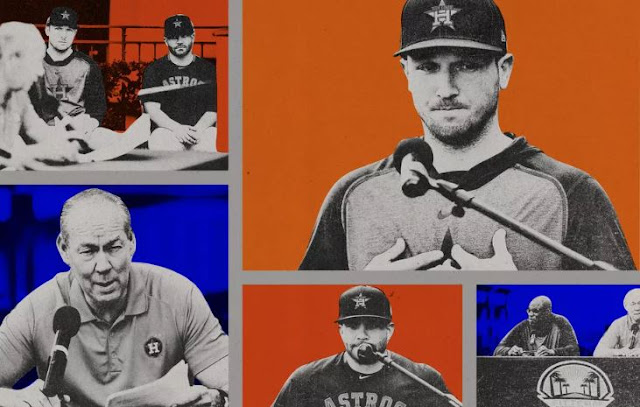 Ever since the news of the Astros’ electronic sign-stealing scheme came to light last fall, I’ve been amusing myself by drawing comparisons between actors involved in this scandal and the principal figures of Watergate: Jeff Luhnow is Bob Haldeman, Athletic reporters Ken Rosenthal and Evan Drellich are Woodward and Bernstein, disgraced former Astros executive Brandon Taubman is Spiro Agnew—the metaphor writes itself.

As Astros players arrived in camp on Wednesday, security barred reporters from the clubhouse and the player parking lot to prevent them from asking questions about the offseason’s biggest story. But on Thursday morning, Nixon finally had to face the press.

“Nixon,” in this case, is Jim Crane, the 66-year-old shipping magnate with a questionable business background who owns the Astros. Flanked by new manager Dusty Baker and (briefly) by star players José Altuve and Alex Bregman, Crane attempted to walk a tightrope by apologizing for certain aspects of the team’s wrongdoing without accepting responsibility or expressing contrition himself, all while hiding behind a commissioner’s report that merely scratched the surface of the Astros’ deceit and malfeasance.

It’s easy enough to lie (or spin, to use the common political euphemism) when the facts are unknown and just one person is in charge of the message. But as more people become available for questioning, keeping a fictional story straight becomes parabolically more difficult. The target here is a baseball-consuming public that—with the exception of a few Astros partisans whose allegiance to team outweighs allegiance to facts or ethics—has not only been whipped up into a continental frothing outrage, but also knows Houston’s party line to be bogus. Anything less than abject and transparent contrition would have been rejected out of hand.

Unsurprisingly, the Houston businessman was not prepared to make an absolute apology; throughout a torturous press conference, Crane equivocated, deflected, and dissembled at every turn. His time at the microphone was as shocking and dramatic as the Astros’ riveting run to the 2017 World Series, with highlights to suit the tastes of every fan.

Some viewers likely got a kick out of Crane saying that the sign stealing didn’t affect the game, then less than a minute later, denying ever having said such a thing. (Even St. Peter had more lead time.) Other fans of public apologies probably enjoyed ESPN’s Marly Rivera ending the presser by essentially chokeslamming a stammering Crane through the announcers’ table.

My personal favorite moment, however, was Crane’s dazzling statement of billionaire class identity: “I don’t think I should be held accountable.”

That’s the whole point of this exercise. All morning Crane wielded the commissioner’s report like a veritable Holy Shield of Righteousness, but more and more that document seems to have been crafted to set up four former Astros employees—Jeff Luhnow, A.J. Hinch, Alex Cora, and Carlos Beltrán—as the fall guys, while insulating players and ownership from negative consequences. Never mind that this scheme was, at least, executed by the players, if not conceived by them. And if Luhnow and Hinch were suspended and fired for failing to curb the excesses committed under their watch, why shouldn’t that same treatment be given to the man who owns the team, who got to touch the World Series trophy first?

If Crane wasn’t prepared to answer those questions truthfully and transparently, he might as well not have bothered to apologize at all. That’s essentially the tack many of his players took. Instead, he took inspiration from a Houston public transit system that’s light on trains and trolleys, and threw Luhnow and Hinch under the bus at every opportunity. If you have designated fall guys, you might as well use them, I guess.

The Astros of the past several years gained notoriety not just for winning, but for doing so with panache, with a roster full of star players who were more intelligent, charming, and outspoken than your average ballplayer. But on Thursday, those players didn’t fare much better than Crane. Bregman and Altuve issued statements that were as comically short as the players themselves before retreating to the clubhouse.

Bregman in particular led off his paragraph-long statement by saying, “I am really sorry about the choices that were made by my team, by the organization, and by me,” which has to set some kind of record for transparency of deflection through the passive voice. Once the clubhouse opened, George Springer told reporters that he felt remorse and regret over “the fact that we’re in this situation today.” Justin Verlander said he wishes he’d spoken up to stop the banging. Josh Reddick expressed remorse generally but said he didn’t see any reason to apologize to opposing players at all.

Carlos Correa came closest to delivering a satisfactory apology. He admitted that the Astros stole signs, that they knew, even in the moment, that it was wrong, and that it had a negative impact on opponents’ careers. But even he exclusively referenced the 2017 season, in accordance with the commissioner’s report, which either intentionally or subconsciously refuted subsequent reporting that the scope of the Astros’ cheating extended beyond what the commissioner’s office acknowledged.

I’ve been covering sports for a decade now, and watching sports far longer than that, which means I know an insincere and unsatisfying apology when I see one. Even so, Crane and (with few exceptions) his players broke new ground on Thursday morning by apologizing—if you want to call it that—with so little force and credibility that the lack of effort was more offensive than the lack of integrity.

These people have weathered bad press of their own making for four months now. Their handling of the Taubman incident was so clumsy and arrogant it should have served as either an object lesson in the importance of tact in these situations, or an excuse to tear out the organization’s PR department and start anew. And yet the franchise seems like it has not even learned how to message effectively in the face of a crisis; Crane said Bregman and Altuve were unprepared to face questions about the scandal at FanFest last month, a statement that, if true, beggars belief.

The Astros have had an entire offseason to figure out a way to mollify the public, even if they weren’t actually sorry, and the woeful display Crane put on didn’t even manage to drag them back to the bare minimum standard of perfunctory insincerity.

Minutes before Crane went on stage, I joked that it would have been more fun if the Astros refused to apologize, and told the assembled reporters to count the rings and go to hell. Having seen what passes for sincere contrition on Crane’s part, they would’ve been better off taking that approach. At least then I would’ve respected their honesty.