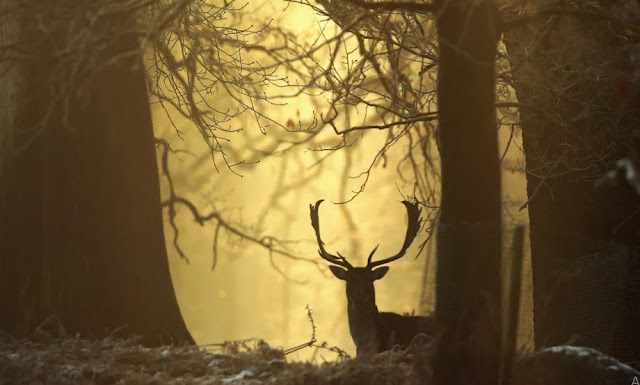 We celebrate the 50th anniversary of Earth Day on April 22 in the midst of a pandemic, with the world slowed and hobbled by Covid-19. Yet Earth Day reminds us the planet still turns, the global climate and biodiversity crises still cry for attention, and nature still reveals its shimmering resilience. Google is honoring the occasion with a Google Doodle dedicated specifically to bees.

This Earth Day, as humans have retreated indoors to slow down the spread of the virus, we’re finding out how ecosystems respond to our absence from public spaces. Meanwhile, our planet, and our understanding of it, keeps changing at a frenetic pace. Average temperatures are rising, natural systems are degrading, and our vulnerability is increasing.

Even as many of us remain locked inside, there is still a big wide world out there with much to explore and discover. As part of a Vox tradition started by former Vox writers Brad Plumer and Joseph Stromberg in 2014, here are the seven most fascinating, impactful, and troubling things we’ve learned about our planet since the last Earth Day:

1) We live with a lot of air pollution, but we can reduce it pretty quickly
Sometimes you don’t notice something until it’s gone. Such is one stark visual lesson of the pandemic: Air pollution is something way too many people around the world breathe in every day.

The shutdowns of business and travel during the Covid-19 pandemic have cleared the air in cities as pollution has fallen sharply. China, for instance, experienced a 40 percent decline in nitrogen dioxide, a pollutant produced from burning fossil fuels in cars and power plants, earlier this year compared to the same period last year.

Air pollution is a deadly threat, killing millions around the world every year. It’s also linked to more severe outcomes for Covid-19. Conversely, the economic slowdown stemming from Covid-19 showed that reducing pollution yields massive benefits for public health. One researcher estimated that the drop in air pollution in China saved 20 times as many lives as were lost to the virus.

And China isn’t the only place seeing clearer skies. In the United Kingdom, nitrogen dioxide pollution fell 60 percent after the country implemented a lockdown compared to the year prior. A nationwide lockdown in India revealed skylines and mountain vistas that had been obscured for decades.

The Covid-19 pandemic has shown how quickly air quality can improve. But it doesn’t mean we should celebrate the pandemic for its impact on the environment. The clearer skies came at a devastating social and economic cost. The challenge for countries, then, is to reduce pollution without a massive toll.

Countries like China and the United States are weakening environmental regulations in the hope of helping industries better recover from the slowdown, so the pollution could come back with a vengeance. But it’s worth asking why we tolerated so much dirty air for the sake of the economy for so long and whether there’s a better way.

2) The virus that causes Covid-19 likely originated in bats. Many more potential pandemic viruses are out there, lurking.
Though we still don’t know exactly when or where the novel coronavirus, SARS-CoV-2, spilled over from wildlife to humans, scientists who’ve analyzed its genome say it appears to have originated in wild bats.

We shouldn’t be surprised humans got infected with a dangerous pathogen that was circulating in wildlife; with more and more people encroaching further into wild areas, the threat of an event like this has been clear. Scientists who study emerging infectious diseases have been warning about this scenario for years. The 2003 SARS outbreak (which also passed from animals to humans) ought to have been a wake-up call. Yet the big lesson from SARS-CoV-2, which has infected more than 2.5 million people and killed over 176,000 as of April 21, is that our efforts to stop these viruses before they start ripping through human populations have been woefully insufficient.

“Every emerging disease that we battle with preexists in wildlife,” says Dennis Carroll, the former director of USAID’s emerging threats division who helped design Predict, a surveillance program for dangerous animal viruses that the Trump administration decided to shut down in October. If we’re not looking for the viruses out in the wild, he adds, and if we keep putting pressure on the ecosystems, then we’re likely to get smacked with another crisis like this one.

Pandemics, says Carroll, do not have to happen. “They are a consequence of the way we live. You can pick [viruses] up earlier if you’re really including in your surveillance those places where animals and people are having high-risk interaction, those hot spots.” Most of those hot spots are in East and Southeast Asia, but the international community can step up collaboration to monitor them. As this Covid-19 crisis has proven, contagious viruses can spread quickly around the world with the help of us increasingly connected, mobile, and urban humans. Since they can quickly become every country’s problem, it’s in every country’s interest to stop them.