The little things we always take for gRanted End 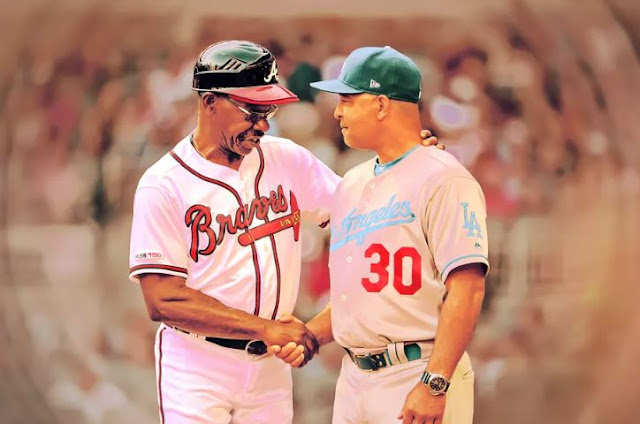 I’d never realized until this week how integral handshakes were to my spring training routine. The handshake is our national standard for signaling friendship and good intentions to a person you don’t know well enough to trust totally. And they’re an essential part of a reporter’s toolbox. There are very few MLB players I run into frequently enough to prompt recognition on sight, so when I approach a player’s locker it’s typically with my notebook in my left hand and my right hand empty and extended as I identify myself and ask for an interview.

Team media relations staffers usually get a handshake and a few seconds of small talk before I say, “Oh, by the way, can you facilitate this interview for me?” I trade gossip and jokes with beat writers and traveling media, but only after a handshake brings an end to a long winter’s separation. Close friends might get a handshake that evolves into a one-armed bro hug.

As the Coronavirus Hits the NBA, the Severity Hits Home for Fans
At this point, shaking hands is as natural as blinking or drawing breath, and in the context of a working journalist’s life, it’s nearly as common and as useful. That’s why it’s so hard to stop, even if doing so could save lives.

Particularly when that adjustment comes in the course of days, or even hours. On Monday morning I left the Angels’ clubhouse in Tempe, Arizona, feeling momentary regret after I’d shaken hands with a player—I knew it was a habit that I should’ve already broken, but at that point the coronavirus still seemed like something that might affect American society in a matter of weeks, not hours. Maybe lockdowns and quarantines had become the norm in Italy, China, and South Korea, but some stubbornly exceptionalist corner of my brain held on to the conviction that it either couldn’t happen here, or that wouldn’t happen without ample time to prepare.


I visited two team camps early on Monday to report the stories I had planned to write before Opening Day, then set for March 26. That afternoon, MLB had closed off media access to team clubhouses. By Tuesday morning, handshakes had been all but replaced by nods and elbow taps. Yet even those were delivered with a knowing, almost winking, sensibility. Maybe we’d have to make some minor temporary changes to keep players away from the public, but the season would go on.


By Wednesday night, it was clear that was no longer the case. Once the NBA suspended its regular season after Utah Jazz center Rudy Gobert was diagnosed with COVID-19, it became untenable for any other sports league to continue. Earlier that afternoon, MLB’s big worry was seemingly that the 12,000-seat Peoria Sports Complex wouldn’t be big enough to accommodate the Mariners’ needs on Opening Day. Less than 24 hours later, Opening Day had been postponed indefinitely and nationwide. By that point, the NHL and MLS seasons had been suspended as well, and the leagues that took an extra day to close up shop—like the PGA—were viewed as laggards. Sports as we know them suddenly ceased to exist.

Even in the modern geopolitical climate, in which days can feel like years, American society has transformed so comprehensively over the past week that it’s difficult to comprehend, much less to accept. Our institutions, large and reactive as they tend to be, are simply not equipped to turn themselves inside-out overnight. Even the individuals who can weather a weeks-long quarantine without humongous difficulty have come to expect more than a few hours’ notice to prepare.

But if we have to work from home for a few weeks, or cancel international travel plans, or go without baseball for a while, well, that’s a small price to pay. COVID-19 has killed thousands already and could soon kill many more. As of Friday afternoon, more than 1,800 people in the United States had been diagnosed with the disease, and the main reason that number isn’t higher is because of the limited availability of testing. By the time this is all over, it’s likely that even those of us who escape unscatched will know someone who will have suffered profoundly as a result of this pandemic. Even those of us with little chance of suffering greatly from this disease should be gravely concerned about its potential to harm our neighbors and the society we inhabit together.


That alone should be frightening enough, but many Americans have become disquietingly comfortable with staring down global calamity. The 21st century has been an unrelenting haze of war, economic precarity, governmental failure, class conflict, and impending irreversible climate change. I’m scared now, but I’ve been scared for the past 20 years. Most Americans under 40 don’t know what it’s like not to be scared.

In my lifetime, only 9/11 has ever caused such a radical change to our cultural landscape in so little time. We’ve lived through war, economic catastrophe, and natural disaster, and MLB has always kept playing games after a few days. The league has played through two world wars and is immensely proud of having done so—the letter from President Roosevelt urging commissioner Kenesaw Mountain Landis to keep the sport going is on display in Cooperstown.

Yet the world is smaller now than it was 80 years ago, and the crisis we face is of a different nature. Modern professional sports draw large crowds and require travel that, under current circumstances, could infect millions and overwhelm our medical infrastructure. With so many lives at stake, it would be irresponsible not to treat coronavirus with greater deference than any crisis that preceded it. We can figure out how to rebalance the schedule and restore media access later. For now, all priorities are secondary to mitigating the spread of COVID-19.

Easy as that calculation is, it’s also why this moment is so terrifying. Each spring afternoon that passes without baseball on the radio is a reminder of our own profound societal precarity. Every closed-door workout session signifies that a dream that takes a lifetime to fulfill can be put on hold in a matter of days or hours. In order to save lives, we’re giving up, if only temporarily, the things we live for.

It’s reasonable to take time to ruminate on that loss, even if it feels trivial. We’ve had to change the way we work, think, and even say hello and goodbye in less time than it usually takes to mail a letter from one end of the country to the other. We can adapt, and we must. But it would be a mistake to attempt to understate what we’ve already lost, even if that’s the price we pay for not losing much, much more.