Michael Jordan turned down chance at playing for MLB team 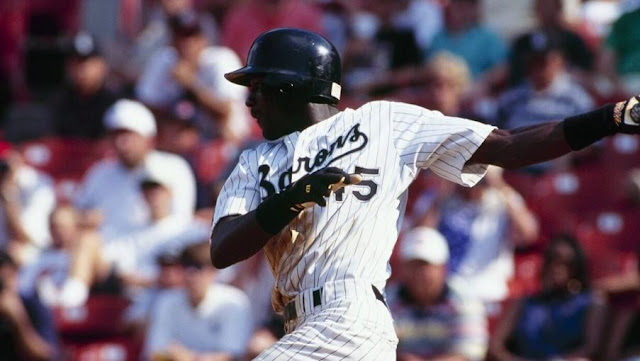 Michael Jordan stepped away from basketball in 1994 and gave baseball a try, but he didn’t have to go play in the Chicago White Sox’s minor league system right away.

“You recall when Jordan stopped playing basketball and decided to try baseball, and ultimately went down to the Birmingham Barons — the Chicago White Sox affiliate,” Alderson said. “When I heard that was happening, or about to happen, I called his agent right away and said, 'Hey look, I understand he may be going to Double-A. I don't even know who the 25th man is on our major league team right now, I will sign him and put him on the major league roster. He'll be part of our 25-man team. Tomorrow.'”

Alderson said he wasn’t thinking about whether the Chicago Bulls star was going to fill a need.

“It wasn’t about, 'We’ve got a spot for him, he’s got a particular skill,’” he said. “That wasn’t the idea. The idea was, 'We’ve got Michael Jordan on our team' and the interest that would have generated.”

MLB.com covered the Athletics’ flirtations with Jordan earlier this month. Jordan’s agent, David Falk, explained why his client didn’t want to go to the majors right away.

“I was excited about [the offer], and Michael was very appreciative,” Falk said. “But he wanted to do the baseball thing from the ground up. He didn’t feel he deserved a spot on the Major League roster and didn’t feel he was ready. He didn’t want to be a Herb Washington type who would just steal bases and be a part-time outfielder.

“Michael’s an amazingly loyal guy. If not for his relationship with the White Sox, [the A’s offer] might have been something he might have done.”

Jordan never made it to the majors and was back in the NBA for the 1994-95 season. He batted .202 with the Barons and hit three home runs.