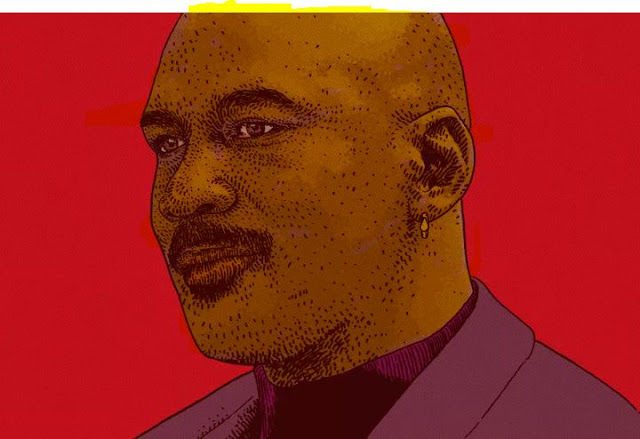 Almost everything that can be written about Michael Jordan has, at one time or another, been written, and usually more than once, but here’s something you might not know: My sister used to control him with her thoughts. At least she said she did, and I had a hard time disproving her. She didn’t control him off the court. It was only his game she took credit for. No one, including my sister, could explain how or why this power had chosen her.

“Michael Jordan and I just have a kind of … connection,” she’d say. She was maybe 14. She’d never manifested telekinetic abilities, to my knowledge. I don’t think she’d even been a basketball fan before. Nevertheless she had come into this heavy responsibility. You had to admit she carried it well. We’d be sitting around our living room in Oklahoma, watching Bulls games with our dad, and the whole time she’d have to keep beaming brainwaves into him through the TV. MJ would pull off some incredible shot, one of those floating, six-phase layups where he seemed to be skywriting the word “Oglala” with his shoulder, and my dad and I would go: “Great move, Emily!”

“I’d better get some rest,” she’d say on a summer evening. “Michael and I have a big playoff game tomorrow.”

The first thing to say about The Last Dance, ESPN’s much-hyped new 10-part Jordan docuseries, is that—like every other Jordan documentary before it, and indeed all other Jordan coverage to date—it fails to explore in any substantive way the role played by my teenage sibling in constructing the greatest NBA career of all time.

At least not in the installments that have aired so far. It’s possible that there’s a really big twist coming late in the series. Episode 8 might well open with an awestruck Phil Jackson shaking his head and saying, “If I’d known back then that our sport could be played at such a high level by an adolescent couch-warg with no pro experience … wow. I guess I might have hung up that third dream catcher.”


What The Last Dance does do, though, even in its early episodes, is resurrect a time when tens of millions of people experienced “a kind of connection” to Michael Jordan. The series reminds you—and it’s strange how much we needed reminding—that this was something many, many people felt.

My sister’s joke about moving MJ around with her mind was only a somewhat exaggerated version of how hordes of basketball fans (and non-basketball fans, and probably fruit flies, though they couldn’t buy Nikes) watched his games in the ’90s. It’s only a somewhat exaggerated version of how we watch great athletes in general—not literally guiding their movements, that is, but somehow participating, hitching an imaginary ride in their bodies. We feel a kind of sympathetic echo of their actions, as if, on some shadow-cellular level, they’re our actions, too.

After his retirement, something seemed to flip, and the intimate identification Jordan inspired during his career soured into something weirder and sadder. So the most enjoyable thing about The Last Dance, to me, has been the chance to go back to the original sunburst, to remember what it felt like to watch him before watching him started to feel bad.

No American athlete in my lifetime made more people want to move the way he did. No American athlete made more people feel they were doing it. He did it alone but we, somehow, did it with him. That was us at the top of the key, holding our wrists high as the clock filled up with zeroes; that was us flying at the rim from the free throw line. Be like Mike! It was a resonant slogan, not because anyone particularly wanted to imitate Michael Jordan on a personal level—what would that even have meant?—but because, when we watched him play, we were him.

I think he was probably the most physically gifted athlete I’ve ever watched. At that superelite level, though, it’s hard to make comparisons, and hard to know what the comparisons would even mean if you could make them: Who was more physically gifted, Usain Bolt or Cristiano Ronaldo? What I know is that no one had a better story than MJ did. By “story,” I don’t mean what ESPN talks about over a tinkly piano vamp in an intro (“long before he became a world-class candlepin bowler, adversity was Carlton A. Montmorency’s middle name”).

I mean the thread that strings the highs and lows of a career together into something meaningful, the deep-down basic shape through which you make sense of the athlete’s time in the game. Jordan’s was so simple and so charismatic that it was almost the original template of the sports narrative itself. It was the closest approximation reality has ever offered us to the ur-story: After initial struggles (we all still believed he’d been cut from his high school team), the player makes it to the big time, sinks big shots at big moments (the main phase of Jordan’s career both opened and closed with late-game championship-winning shots), wins everything that can be won, shatters records, makes a fortune, and is universally beloved. The end.

How good was Jordan’s story? It was so simple and so charismatic that later great athletes have had their own narratives judged by how closely they resemble his. LeBron might or might not be able to beat MJ one on one, but his story will always be a muddle, relatively speaking: Jordan never went to Miami, never lost in the Finals, never tried to be a movie producer. More than that, Jordan’s story was so simple and charismatic that there are great athletes whose stories are literally “the struggle to recreate Michael Jordan’s story”: Kobe Bryant was every bit as monomaniacally driven and ambitious as Jordan, but he was humanized by Jordan’s shadow, made approachable by the fact that he was chasing an ideal rather than simply existing as one.

(People yell “Kobe” when they throw a wad of paper at the trash can because there’s no suspense in yelling “Michael”: The whole point of Michael was that you knew he wouldn’t miss.) More than that, Jordan’s story was so simple and charismatic that it convinced us to overlook all the places where it wasn’t actually his story. Every messy human element, every reversed decision, every hard-to-reconcile addendum—the comeback with the Wizards, the bullying, the baseball interlude—was either retrofitted to suit the needs of the larger narrative or erased. The gambling got folded back into the classic sports virtue of “competitiveness”; the Wizards era had the bizarre quality of being forgotten even as it was taking place.

And yes, some of that has to do with the media being more monolithic, and athletes’ images being more carefully controlled, in 1994 than today. (God knows what Jordan’s legacy would look like now if we’d been able to see him interact with denim brands on Instagram.) Underneath that, though, I think he spoke to a larger desire.

Like any competitive pursuit, sports have always trafficked in the ideal. Here’s the perfect body; sculpt it. Here’s the perfect victory; write a poem about it in Greek. For the most part, though, the ideal remains an abstract concept. People chase perfection but don’t reach it, as a rule.

In America in the 1980s and ’90s, though, we decided that we were going to get to see the ideal—the real thing, the source itself, in the flesh. You could write a thesis, probably, on the historical factors that went into constructing that determination. The point is, Michael Jordan gave it to us. He came so close to actually embodying the ideal athlete—he really did hit the buzzer-beaters, he really did seem to move in a different and more beautiful way than other players, he really did seem to hang for an impossible extra beat in the air—that we were able to believe the ideal athlete existed. He was here. He was ours. He was the perfect fusion of capitalism and destiny.

He was a living person, but the way we experienced him, he was a basketball player in approximately the same way as King Arthur was a political leader.

The thing about the ideal in sports, though, is that once the perfect story reaches its conclusion, the audience has no further need for the protagonist. Once he’s no longer playing and winning, he’s just a collection of individual traits like everyone else, and individual traits can only clutter the ideal.

Shaquille O’Neal can go on illuminating his Shaqness for us in venues outside basketball, but when Michael Jordan shows his personality, it’s inconvenient. That’s why Crying Jordan meme was funny, and also jarring, in a way a Crying Iverson or Crying Kareem meme wouldn’t have been. It showed the ideal totally swamped by messy human weakness. It reduced the ideal to a state of tearstained puffiness.

(Puffy is not a word you want anywhere near the ideal, as a general rule.) Show a normal person overwhelmed by tears and people will respond with sympathy, or will feel moved; show the ideal in tears (or the ideal aging, gaining weight, looking unsure, making flawed choices) and the response is a kind of startled mockery.

I wish I could say The Last Dance retells Jordan’s story in a way that restores its humanity, but from what I’ve seen so far, it seems more interested in burnishing his ideal status than fundamentally altering the way we see him. (Like many products of the ESPN nostalgia factory, it seems to have PR goals that are hard to disentangle from its artistic goals.) We get a lot of semi-humanizing footage—young MJ riding his bike around the UNC campus, MJ the dad playing dribbling games with his son—but it’s so interspersed with talking heads vamping on couldn’t-believe-my-eyes-this-guy-had-no-quit-in-him that it never has a chance to change the basic terms of the story.

What I’ve appreciated most about it, I think, is its focus on the last season of the Bulls’ six-title ’90s run, which gives it a deliberate undercurrent of impending catastrophe. In the show, the doom that’s coming down the pike is the breakup of the team at the behest of late Bulls GM and series villain Jerry Krause. But for anyone who’s been alive since 1998, some of that aura of dread will inevitably spread to include what we know is coming for Michael:

the years of seeming superfluous in his own story, the sense of rejection and disappointment that surrounded him for such a long while. I sincerely hope those forces are about to lift; either way, The Last Dance manages to convey something of both the joy of the ideal in its moment and the high cost it exacts afterward. It’s a reminder, that is, that my sister’s joke was actually true. Michael Jordan showed us what it felt like to fly, but he landed where we moved him with our minds.
Diposkan oleh jojo mma at 3:08 PM