Charles Portis’s Celebration of the Absurd 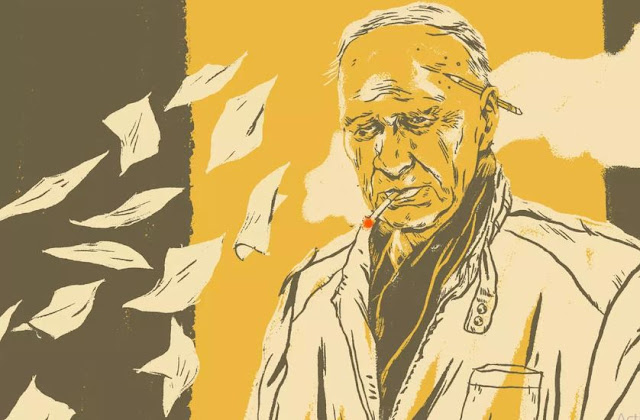 The novelist Charles Portis, who died in February at the age of 86, was one of the great American chroniclers of the 20th-century bizarre, but what makes his books so funny and wise is that his “normals” are every bit as particular and odd as his “abnormals.” He understands that weirdness begins at home.

More than that, he understands that weirdness isn’t really weirdness; the perception of weirdness is only a sign that the world is larger and more varied than any one person’s ability to understand it. Portis loves to take people who, for one reason or another, are highly committed to their own way of seeing things, then send them on journeys just over the horizon of what their expectations can accommodate. His novels are marvelous odysseys into the dark heart of WTF.

Consider Norwood, Portis’s first novel, which was published in 1966. Norwood follows a recently discharged U.S. Marine, Norwood Pratt, who travels from Texas to New York City in pursuit of a fellow Marine who owes him $70. (The relative paltriness of this sum is important: Norwood doesn’t need the money so much as his touchy, carefully ordered mind needs to tie up the loose end it represents.) The trip takes Norwood, who sees himself as a profoundly sane and normal person, through a wide swath of American strangeness: He winds up kidnapping a performing chicken, meeting “the world’s smallest perfect man,” being attacked by a hobo in a train yard, and so forth. But some of the book’s most magically strange writing occurs at the very beginning, when we learn about Norwood’s upbringing—that is, when we learn about the past that constructed Norwood’s sense of himself as a normal guy.

Norwood’s father, who dies just before the book begins, was an “alcoholic auto mechanic” who “always enjoyed living on the edge of places, or between places, even when he had a choice.” So the family moves around a lot, along a stretch of I-82 between Stamps, Arkansas, and Hooks, Texas. “There was something Mr. Pratt dearly loved about that stretch of interstate concrete,” Portis writes. “They clung to its banks like river rats.” We learn about some of the houses they lived in. One is “in between a Tastee-Freez stand and a cinder-blocks holiness church.” On the side of the house someone has painted “ACTS 2:38” in Sherwin-Williams flat white paint. Later on, they move

to a tin-roof house that was situated in a gas field under a spectacular flare that burned all the time. Big copper-green beetles the size of mice came from all over the Southland to see it and die in it. At night their little toasted corpses pankled down on the tin roof.

Pankled! After Mr. Pratt’s death, Norwood’s sister Vernell initially mopes around their house and refuses to do any work. Norwood pushes her to get a job as a waitress at the local cafe, and she ends up suddenly marrying one of her customers, a disabled veteran named Bill Bird, who sits all day in his booth reading magazines. (“Sometimes I think I might have been happier,” he says, “if I didn’t have such a searching mind.”) Bill Bird moves into the Pratts’ house and proceeds to make Norwood’s life miserable. He uses all the hot water in the bathroom. He fills the cabinet with his own little bottles, so that Norwood’s shaving gear has to sit on the windowsill. He insults the Marine Corps.

The house is so small that Norwood, Bill Bird, and Vernell can carry on three-way conversations from three separate rooms. Portis has a flawless ear for the strange turns conversations take when the participants simply follow one idea to the next. When Norwood, exasperated, throws a sausage at Bill Bird, and Bill Bird indignantly declares that “you could very easily put someone’s eye out like that,” Vernell gives a little laugh and says, “I don’t think you could put anybody’s eye out with a sausage.”

Meticulously building up Norwood’s “normal” world in this way—a way that makes it both highly believable and comically surreal—allows Portis to pull off a beautiful trick midway through the novel, when Norwood finally reaches New York City. We’ve been reading the novel to this point with what you might call New York City eyes, which is to say that we’ve been conditioned by hundreds of other books, magazine articles, and movies to see Norwood’s side-of-the-highway existence as exotic. We inhabit a comfortable readerly milieu in which “normal” people might do all kinds of things—summer on West Egg and inherit mysterious fortunes and win wars against aliens and fall in love with the strangers who light their cigarettes—but they do not, as a rule, live next to Tastee-Freez stands and have Bible verses painted on their houses. Now, however, as Norwood takes in the big city, we realize that his sense of what’s normal has temporarily overwritten ours, so that we see the Manhattan of the early ’60s through his eyes.

He looked at the movie posters on both sides of Forty-second Street and had a glass of beer and some giant corrugated French fries. The windows were full of many good buys in transistor radios and field glasses. Did anyone live upstairs over the movie theaters? He saw himself on television at Robert Ripley’s Believe It or Not Odditorium, and looked at all the curios downstairs, believing most of them but not believing the one about Marshal W. M. Pitman of Wharton, Texas, shooting a bullet right into a crook’s gun in 1932. Still, there was the gun, and why would they make it up?

Charles Portis was himself from Arkansas. As a young man, he left his home state to work in journalism, first in New York and then in Europe, where he was the London bureau chief of the New York Herald Tribune. In his 30s, he quit the newspaper business and moved back to Arkansas, where he spent the rest of his life. After his death, some of the eulogies made a point of being astonished that Portis chose to return to the South to write his novels, when he could have stayed in New York and hung out with Tom Wolfe. Personally, I found this departure from the perceived norm less interesting than the insight Portis’s mixed experience gave him, the vivid sense of how surreal one place can look when seen from another’s perspective. (I grew up in Oklahoma, in a town where the oil refinery flare never stopped burning; I can attest to how accurate a sense he had.)


Portis wrote five novels altogether. At least three of them are masterpieces: Norwood; True Grit, from 1968; and The Dog of the South, from 1979. True Grit, especially, is a nearly perfect novel. It’s told in the first person by Mattie Ross, a 14-year-old girl who sets out to avenge her father’s murder in the waning days of the Old West. The joke here is that the main character is so positive, rational, sensible, and determined that she essentially sweeps away all opposition, despite being an adolescent girl in a lawless territory of outlaws and gunfighters. Here, the protagonist’s sense of the normal is such a force of nature that literal anarchy doesn’t stand a chance against it. (Portis’s leading characters all have meticulous and detail-oriented pastimes, with many of his men being devoted to auto maintenance; Mattie loves hammering out the finer points of legal contracts.)

In The Dog of the South—another first-person narrative—a 26-year-old Arkansas man named Ray Midge drives from Little Rock through Mexico and into Belize in pursuit of his wife, who’s run off with another man in Ray’s Ford Torino. Unlike Norwood or Mattie, Ray is coming apart at the psychological seams, and Portis gives him a habit of brightly interjecting uptight observations in the middle of his own narrative.

I drew closer to admire the map. It dated from around 1880 and it was a fine piece of English cartography. Your newer map is not always your better map! The relief was shown by hachuring, with every tiny line perfectly spaced.

I’ve been reading Portis lately mostly because he wrote so many road novels, and road novels have a special appeal at a moment when so many people are cooped up indoors. He captures as well as any American novelist the feeling of going somewhere, the sense of travel not just as a change of location but as an open-ended challenge to the rules you’re carrying in your head. I don’t want to reframe Portis as some sort of pandemic novelist, but I’ve found these books hugely consoling, in their offhand way, at a moment when the world’s sense of the normal seems less stable than it’s been in a long time. What’s normal, anyway? Portis’s novels make the case that humanity’s best aspects—courage, affection, loyalty, responsible care for vehicular transport—can survive quite a bit of jostling. Maybe even as much as human absurdity—which, as both Portis’s novels and reality repeatedly demonstrate, can survive almost anything.