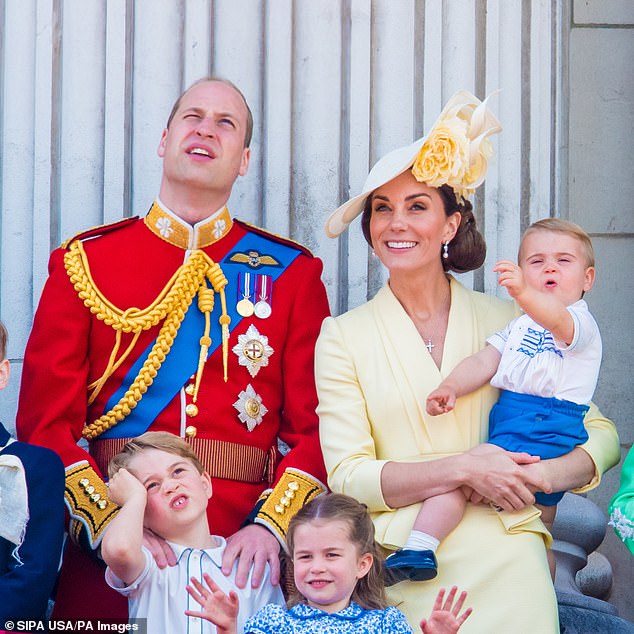 We haven’t seen Prince Louis since that adorable video of him clapping alongside his siblings, but it was well worth the wait as the Duke and Duchess of Cambridge have released these snaps to celebrate his second birthday.

It’s clear to see the little prince is going to grow up with a sense of style as Kate has taken inspiration from her own wardrobe and that of William by dressing the toddler in a blue gingham shirt. Thankfully, the sleeves have been rolled up so he can get stuck into painting a masterpiece!

If you want your little one to have the royal look, his shirt is part of a dungarees set from Tu at Sainsbury's and the whole thing will set you back just £12. Bargain!

Prince Louis can be seen beaming having smeared rainbow colours across his cheeks in an adorable unseen picture taken by Kate Middleton to mark the royal's 2nd birthday.

The snap, which was released on Kate Middleton, 38, and Prince William's, 37, official Kensington Royal Twitter page today, shows the adorable Prince grinning having  covered his face in paint.

Posting the hilarious image alongside one of the Prince showing off his rainbow painted hands, Kensington Palace captioned the post: 'Instagram vs reality.'

The messy moment, which was caught on camera by amateur photographer the Duchess of Cambridge, will likely strike a cord with parents across the country.

The image was shared after an initial series of charming photos showing the well behaved royal enjoying an arts-and-crafts session as he painted rainbows to celebrate the NHS.

Instead he is now a proper cheeky little boy, full of life just like his brother, Prince George, six, and sister, Princess Charlotte, who will turn five next month.

As we can see Louis, dressed in a blue checked shirt, also loves his arts and crafts – one of Kate’s favourite things to do with her children – and has no fear of getting his hands dirty.

In the photographs released to mark his birthday today, the royal can be seen beaming at the camera while creating the artwork in the gardens of his home of Anmer Hall.

He looks positively ecstatic to be getting so covered in paint as he makes a rainbow patterned handprint to stick up on the front window of the family home.

Pictures of rainbows started springing up up in windows across the country after schools closed in response to the coronavirus outbreak.


They originated in Italy and quickly spread to the UK, where they are seen as a message of hope and something fun for children spot on their daily hour of exercise. Kate even carefully painted a rainbow on his hands to make a perfect print.

The NHS and its staff is something that William and Kate have put at the heart of their private and professional lives, and this week announced a new initiative to support key workers by providing a dedicated mental health support system, Our Frontline.

Their three children are also encouraged to take part in the 'clap for carers' every week, which will take place again tonight at 8pm.

Royal fans were left swooning last month after the Duke and Duchess of shared an adorable clip of their children applauding the NHS MMA.

Prince George lead Princess Charlotte and Prince Louis in a loud round of applause in a short clip shared on Prince William and Kate Middleton's Instagram page.

While Prince George lead the applause, Princess Charlotte could be seen offering a shy smile.

Meanwhile Prince Louis appeared to gaze up at his elder siblings as he joined their clapping tribute. 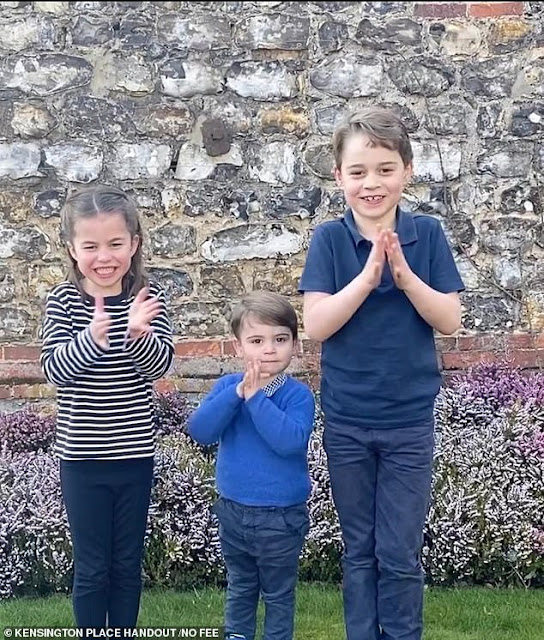